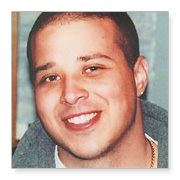 -by Joe and Malita Rodrigues, parents.

Our son John-Paul had a thirst for knowledge and a strong desire to live. Unfortunately, his life was cut short. He had a vision for his goals and dreams way ahead of his time.

At 24 years old he had accomplished more than some do in a lifetime. His piercing green eyes could captivate you in a way that was unimaginable. He was a street smart young man with the softest demeanor willing to help anyone who needed it without asking for anything in return. His vision was so exceptional, it was remarkable.

An example of his great eyesight and determination was when we had a family party at out house and my sister-in-law lost one of her diamond earrings in the backyard on the grass. Well after having several people look for it, he came home and asked what we were doing? After we explained, it took him 5 minutes to find the earring stuck in the middle of the lawn. Another time was when he was in a field of clovers and out of a million clovers he found a four leaf clover. How amazing is that? We still have the laminated clover so we can remember.

We must say whoever received John-Paul’s corneas are lucky persons to be able to see. Hopefully he can give them the same vision and dreams he once had.